Understanding the fundamentals of temperature, power and process controls is made easier if we break the process into its component parts of Sensors, Sensor Placement, Process Load Characteristics, Control Modes, Proportional Outputs, Power Handlers, and Heater and Control Connections. Once the fundamentals are understood, the selection of measurement and control system for the process needs becomes a relatively simple decision.

I. The Control System

It is important to understand what is trying to be accomplished, so the top-level overview would look something like this. The automatic control system typically consists of a process as portrayed below in Figure 1.

4. Other temperature sensors include non-contact infrared pyrometers and thermopiles. These are used where the process is in motion or cannot be accessed with a fixed sensor.

Placement Reduction of transfer lag is essential for accurate temperature control using simple temperature controllers. The sensor, heater and work load should be grouped as closely as possible. Sensors placed downstream in pipes, thermowells or loose-fitting platen holes will not yield optimum control. Gas and air flow processes must be sensed with an open element probe to minimize lag; remember that the controller can only respond to the information it receives from its sensor. 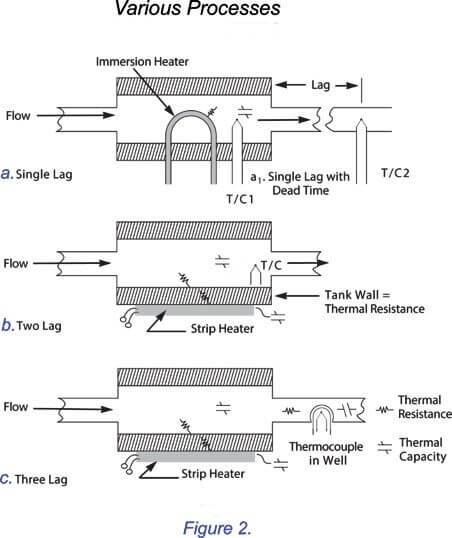 Load power can be switched by three different proportioning means:

Power is switched to an electric heating load through the final control element. Small, single-phase 120/240 V loads may be connected directly to the temperature controller. Larger, higher voltage heaters must be switched through an external power handler. Power handlers are either large relays (contactors), solid-state contactors or power controllers. 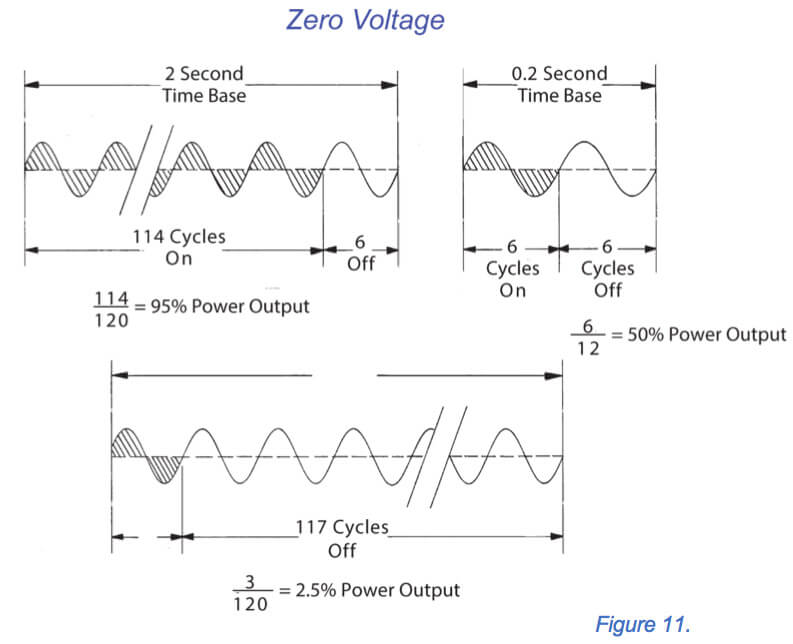 SCR power control selection by switching method can be simplified, as follows:
Use zero crossing for all standard heater applications.

Power controls are connected to the control signal and load, per Figure 12. 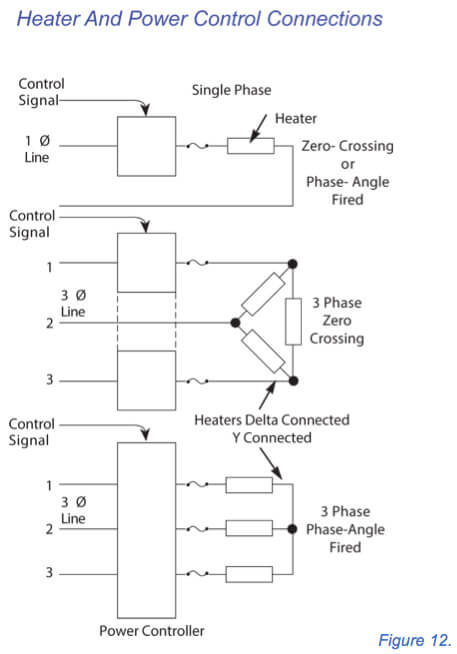 Calculation of SCR size for various voltages and heater sizes is as follows: 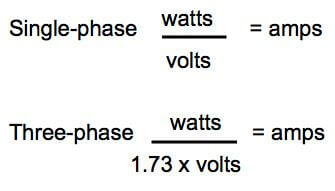 SCRs should not be sized at exactly the heater current requirement because heaters have resistance tolerances as do line supplies.

If the heater is 10% low on resistance, at 240 V, the heater will draw 33 amperes. Damage to fuses will result. Power controllers must be properly cooled and, therefore, the mounting location should be in a cool area. SCRs dissipate approximately 2 watts per ampere per phase.

Proper fusing is essential to protect the SCR devices from damage due to load short circuits. The type of fuse is marked I2T or semiconductor. Only SCRs designed to drive transformers should be used for that purpose. It should be noted that SCR power controllers must never be used as disconnects in high-limit applications. Nazem Kadri Jersey