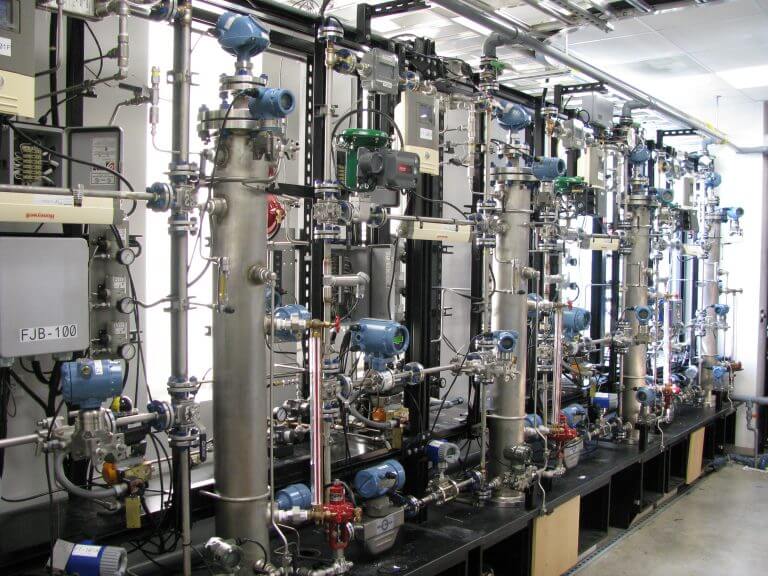 Tighten your process control with different types of control

TIGHTENING CONTROL OF YOUR PROCESS BY UNDERSTANDING DIFFERENT TYPES OF CONTROL

Process control covers a multitude of disciplines and technologies. Whether it be mass flow, fluid flow, pressure, position or temperature, the principles of control follow the same basic rules of measurement followed by adjustment of a process variable to maintain control of the process. The more precise the control, the more uniform and higher quality the end product, and, more importantly, the less the waste and the higher the profitability.
Let’s start with basic descriptions of the types of control, starting with open loop control. The easiest way to explain open loop control is to take a blank sheet of paper and put a dot in the middle of the page….now close your eyes and put your finger on the dot…chances are that you missed the dot in the middle since you don’t have any visual feedback or guide, but this is open loop! The goal is defined but there is no feedback information to let you know how well the goal is being achieved.
Now open your eyes and repeat this test; chances are that you hit the dot precisely since you have the visual feedback of where the dot is; this is a closed loop process. Another analogy for a closed loop control process involves your car. When you push the accelerator, the car’s velocity increases and your experience and eyes tell you when to stop accelerating and ease up on the accelerator; this is an example of closed loop control where you, the driver, close the speed loop. When you have reached your desired speed and let the car ‘do the driving’ you can turn on the cruise control where the speed of the car is measured and monitored with the car occasionally accelerating or decelerating to maintain a constant cruising speed – this is an example of an automatic closed loop process.
Taking this analogy a little further with some of today’s cars that have automatic driving options, where the distance between your car and those around it is measured and monitored, as well as measuring and monitoring how well you stay in your lane, is an example of a cascade control loop where multiple, nested process control loops have an effect on the primary variable, which in this example is the speed of the car.
Now let’s put these examples into the context of an industrial process and have a look at these different types of process control and the advantages, and disadvantages, of each. I’ll use an example of a simple heat exchanger vessel to help explain these different types of industrial control.
Let’s first look at a simple open loop control system:
As I stated above, the definition of an open loop control system is one where there is no information about ‘controlled’ variable, which in this example is the temperature of the liquid out. In this example, the position of steam valve is the control of the process and since there is no measurement of the temperature of the outgoing liquid, any process control is based on the familiarity and experience of the operator adjusting the steam valve. 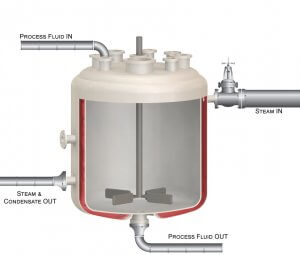 The advantage of this type of control is that it is cheap from an equipment expenditure perspective, however the disadvantages of this type of control are numerous and include inaccurate and widely variable output temperature, large waste costs, experienced operators are required to maintain the process, and any changes, or disturbances, to the process cannot be resolved quickly, leading to more waste and unnecessary expense.
Next, let’s consider the use of a single automatic closed loop controller on the process. The definition of a closed loop system is where the controlled variable (temperature of the liquid flowing out of the vessel) is measured and this measurement is used to manipulate a process variable. In this example a temperature sensor measures the temperature of the liquid flowing out and that temperature reading is compared to the desired temperature (known as the setpoint) and the controller will increase or decrease the steam valve opening accordingly, affecting the flow of steam. 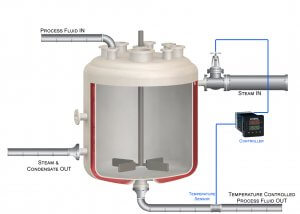 The amount of opening, or closing, of the steam valve is determined by the algorithms used by the controller which have, hopefully, been properly tuned to how the process reacts. There are five types of mathematical models that are used to determine the system response and the ‘weight’ given to each model will determine the effectiveness of the controller response to the system.
These five models are simple On/Off, Proportional response, Proportional with Integral response (PI), Proportional with Derivative response (PD), and Proportional Integral Derivative (PID) response. Let’s investigate these a little further…

1. ON / OFF. On-Off control has two states, fully off and fully on. To prevent rapid cycling, some hysteresis is added to the switching function. In operation, the controller output is on from start-up until temperature set value is achieved. After overshoot, the temperature then falls to the hysteresis limit and power is reapplied.
On-Off control can be used where:
a) The process is underpowered and the heater has very little storage capacity.
b) Where some temperature oscillation is permissible.
c) On electromechanical systems (compressors) where cycling must be minimized.

On/Off control is surprising widely used (think about your home thermostat) but not so much in industrial processes.

Proportional controllers can have two adjustments:
a) Manual Reset. Allows positioning the band with respect to the setpoint so that more or less power is applied at setpoint to eliminate the offset error inherent in proportional control.
b) Bandwidth (Gain). Permits changing the modulating bandwidth to accommodate various process characteristics. High-gain, fast processes require a wide band for good control without oscillation. Low-gain, slow-moving processes can be managed well with narrow band to on-off control. The relationship between gain and bandwidth is expressed inversely:

3. PROPORTIONAL WITH INTEGRAL (PI), automatic reset. Integral action moves the proportional band to increase or decrease power in response to temperature deviation from setpoint. The integrator slowly changes power output until zero deviation is achieved. Integral action cannot be faster than process response time or oscillation will occur. Proportional with Integral control is perhaps the most widely used type of control.

4. PROPORTIONAL WITH DERIVATIVE (PD), RATE ACTION. Derivative moves the proportional band to provide more or less output power in response to rapidly changing temperature. Its effect is to add lead during temperature change. It also reduces overshoot on start-up. Proportional with Derivative control and controllers are not frequently used but have found popularity for controlling servomotors. 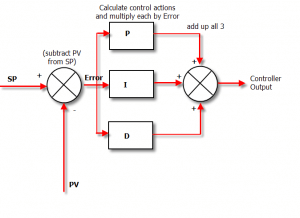 The principle of operation in its most basic form is as follows:
The process value (PV) is subtracted from the setpoint (SP) to create the Error. The error is simply multiplied by one, two or all of the calculated P, I and D actions (depending which ones are turned on). Then the resulting “error x control actions” are added together and sent to the controller output.

The advantages of using a closed loop control process are numerous and include reduced waste of process variable, in our example, steam, tighter control and accuracy of the controlled variable (in this case the temperature of the liquid flow out), and automatic control means no significant human involvement which allows the process to be located in inaccessible or remote locations. This example shows one process variable being controlled, but the addition of multiple controllers for different process variables only increases the degree of process control, reliability, accuracy, repeatability and safety. The only disadvantage I can conceive is the cost of a reliable controller, but this disadvantge is essentially eliminated given the savings in process variable waste of an open loop system.

Taking this concept of multiple controllers a little further introduces other types of control that further increase the degree of process control and all the advantages associated with this. The first type is cascade control where the output of one controller serves as the setpoint for a second controller. In the example here, the temperature of the outflowing liquid is the primary feedback loop and the output from this temperature controller, ie the opening of the steam input valve, serves as the setpoint for the second controller, which monitors the flow of steam. It is also worth noting that the two control loops are independent and that any variations in the secondary, or inner, loop are effectively removed from the primary, or outer, control loop. Cascade control is particularly useful for processes with a slower primary/outer control loop and a faster secondary/inner control loop. 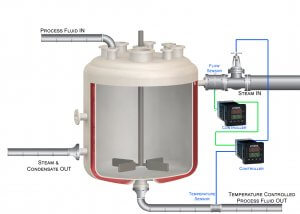 In this example, any variation (often referred to as a disturbance) in the flow of heating steam is controlled, and compensated for, by the secondary inner loop before effecting the primary outer temperature loop. The primary outer loop control is, however, affected by other variables and disturbances from the heat exchange vessel and heated liquid flow etc. and time, since this is the slower of the two process loops.

The advantages of a cascade control loop are as follows:
• The slow, primary, outer loop is isolated from variations and disturbances within the fast, secondary, inner loop.
• If the process has a non-linear response, as most do, the process can be stabilized using a cascade loop.
• By effectively ‘doubling up’ on the measurement and feedback loops increases the efficiency of the process.
This “doubling up “can be done using two discrete automatic process controllers, more commonly referred to as single zone controllers, or, more cost effectively, with a multizone controller.
The second type of control that can be implemented with two controllers is feedforward control. Feedforward control, sometimes called predictive or anticipatory control, involves a multiple input process where the inputs are measured. Feedforward control uses these input measurements and their relationships with the input and output to adjust the process so that variations and disturbances of the input are minimized or eliminated on the process output. In the example below, the measurements of temperature and flow of the incoming liquid, together with the knowledge of the process, are used to adjust the amount of steam being applied to the process.
It should be noted that feedforward control can rarely fulfill all the control requirements of a process and usually incorporates a feedback control loop as well. 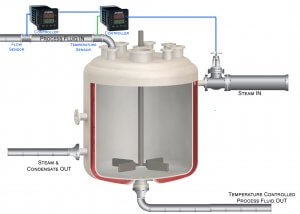 Examples of a single loop controller are as follows…. 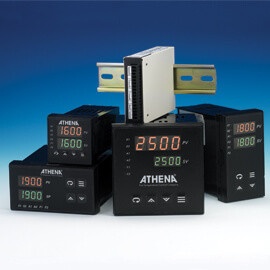 Examples of multi zone controllers that are suitable for both cascade control and feedforward control are as follows….. 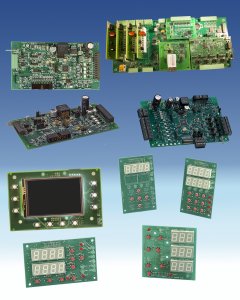